skip to main | skip to sidebar

He which hath no stomach for this fight, let him depart 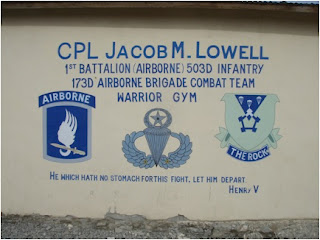 
On a recent visit to Orgun-E to visit 3 Geronimo – the Battalion Task Force assigned to that particular sector in Paktika – I came across a quote from Shakespeare that I have long favored.

“He which hath no stomach for this fight, let him depart.”

The phrase was uttered by Henry V as he rallied his soldiers on the morning of the battle of Agincourt. Outnumbered by his enemy 10 to 1, he asked his men to fight for honor, king and country – but asked that those who did not want to fight to depart, saying that he would not want to share the glory with those who would not risk all to fight with their king.

Counterinsurgency is a war of patience, persistence, presence, and restraint (dare I coin “P3R?” No – I will not do that to you…). It is less about direct combat with the insurgent than it is about building the capacity of the host nation to fight - and to develop their economy and establish good governance under the rule of law.

Hard to explain to an Infantry NCO whose job description reads something like, “responsible for the conduct of combat operations, to include raids, ambushes, and movement to contact.”

You get the point.

And yet we must ask our warriors adapt to this environment and to this fight. They must enable their Afghan partners so that they can take the fight to the enemy. And they must concern themselves with governance, development, and information ops – all while providing the security needed to protect the population.

This challenging mission set has resulted in some pretty restrictive Rules of Engagement – and as a result, more risk to our Coalition Forces.

But to succeed in this endeavor, we must change our mindset, broaden our approach, and accept greater risk.

To summarize: we must fight this war according to the proven principles of counterinsurgency and the tactics, techniques and procedures divined over the last few years of this war.

Those who cannot adapt put this entire venture at risk. And thus I say:

“He which hath no stomach for this fight, let him depart.”

*Roger Carstens is a retired career special forces officer, former special operations fellow at the Center for New American Security, and currently serving in Afghanistan as a Counterinsurgency Advisory and Assistance Team Leader in RC East.